The Map of Wonders

The Map of Wonders is a fully resourced art and design project for primary schools that uses Jersey's heritage and environment as a context for learning. It is the outcome of a partnership between the Department for Children, Young People, Education and Skills and ArtHouse Jersey.

Teachers in schools receive a film that engages children with each quest where they see a local artist demonstrating the art activity and hear a Jersey folktale, myth or legend told by The StoryBeast. They also have the chance to listen to a local person- this may be someone from Heritage or an environmental expert. The films are shot at well known locations throughout the Island to help children to become more familiar with their Island.

Training videos to help teachers improve their own confidence with the subject are included, alongside lesson plans that incorporate wider learning links across the Jersey Curriculum. Schools also receive a box of high quality art resources which supports the delivery of The Map of Wonders lessons to classes across the Island.

The Map of Wonders has a commitment to using recycled resources where possible and to helping children learn more about caring for, and protecting their environment for the future.

The final episode considers the future for Jersey's children and makes a connection with the UN Convention for the Rights of the Child asking children what they want to see in their island home in the future. This episode was timed to be delivered to celebrate Children's Day in Jersey on 3 July.

Here is how Les Landes School took the project to a different level following the interests of the children:

Episode 1 is all about the coin hoard found in Jersey, known as Le Câtillon Hoard. Our film location was Grouville, where we saw the fields and cotils.

The Grouville Hoard is better known as Le Câtillon I and Le Câtillon II, this is because there were two different sets of treasures found on the site.

The hoards are named after the place in which they were found. Peter Langlois found the first hoard on 22nd January 1957; it consisted of over 3,000 items, including coins and silver, bronze and gold jewellery.

Le Câtillon II had over 70,000 late Iron Age and Roman coins. It was discovered using metal detectors by Reg Mead and Richard Miles in a field located in the parish of Grouville in June 2012. The hoard contains beautiful golden torque necklaces, other jewellery and even bits of glass.

Talk with your child and see what they can remember about the coin hoard. 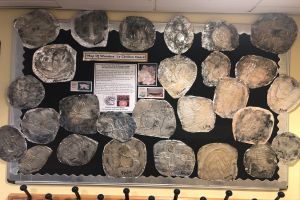 In this episode the children used their imagination to design a coin in their sketchbooks and then they made their very own burnished coins.

They used a technique where they pressed foil over string and then they burnished the coin with black and gold paint to make it look old.

Episode 2: The night of stories

Episode 2 focuses on the tale of 'The Night of the Longue Vielle' and our film location was Hamptonne.

‘The Night of the Longue Vielle’ has been a Channel Island tradition for centuries, but today this tradition is almost lost. It was a special night where families would come together to knit, to sing songs and to tell each other stories and then the children would eventually pass the stories on to their children.

'The Golden Chair' story used in this episode comes from a Jersey folktale. The tale is a moral story which focuses on the greed of the fishermen and acts as a warning that greed carries consequences.

In 'The Night of Stories' pupils worked in groups to produce a weave that resembled a seascape.

They learnt about horizon lines, warps and wefts and in their sketchbooks they mixed colours to resemble stormy skies based on observations of photographs. 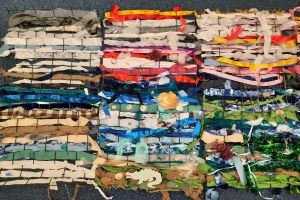 Episode 3 focused on Island conservation and protection. The film was shot on location at Greve de Lecq beach and the main story was based around the legend of how the Jersey Crapaud came to live in the island.

Conservation and the protection of the wildlife in Jersey is a challenge. We have a range of species, including lizards, the Agile Frog, bats, red squirrels and Jersey’s tiger moth which are special to Jersey. Many organisations are trying to protect the natural habitats where these animals live so they can remain safe in the Island for many years to come.

A Jersey person is sometimes called a Crapaud, which is French for Toad. Jersey’s toad, which walks or hops rather than jumps as frogs do, is brown or olive in colour and has a warty looking skin, which tends to be drier than that of frogs. The toad, once a familiar sight in island ponds, has been disappearing from the natural areas where it was once common, although it is known that many private garden ponds still host healthy populations of toads.

Here are some of the fantastical beasts that the children created. In this episode children looked in detail at the fur, feathers and scales of animals.

They created patterns from their observations in their sketchbooks and then designed and made an animal mask. There was quite a bit of drama as children tried on their masks and made sounds to represent their fantastical beast.

The film for this episode was shot on location at La Hougue Bie, a Neolithic Heritage site.

The Neolithic people made homes and communities, and with those communities came the need to create a place to worship, perform rituals and bury the dead. Instead of using wood for this, the Neolithic communities used stone. They made dolmens and megalithic (large stone) monuments. There are lots of these all around Jersey which tells us that there must have been a large enough community of people who would work together to make them. They weren’t all made at the same time, they were built over the space of thousands of years.

One of the best preserved passage graves in Europe and possibly one of the oldest ‘buildings’ in the world is La Hougue Bie.  Hougue and Bie are Norse words. Hougue was a term the Vikings used for man-made mounds, and Bie means homestead. So it could mean the homestead near the mound. It was almost like a cross between a modern-day church and a community hall. Their rituals were associated with seasonal activities because the Neolithic people were the first farmers.

During this episode children made observational drawings of stones they had collected in their sketchbooks and then they created a collaborative passage grave with the stones that they made from newspaper and masking tape. This episode of ‘The Map of Wonders’ focuses on respecting and taking care of our oceans, which are continuously under threat.

The tale in focus throughout this episode is The Bull of St Clement.

A long time ago, Jersey fishermen talked of a roaring bull that roamed around the rocks of St Clement’s beach at low tide. People were so scared of this bull that they refused to go down to the beach, even to go fishing. One fisherman decided to search the rocks and found that the roaring sounds at St Clement were actually caused by a rock pool. The rocks had eroded (or worn away) to form a pipe and at low tide, water was sucked into the pipe making a gurgling sound, which echoed loudly off the rocks. The sounds that could be heard were real, although the myth of the bull was made up by the fisherman. The fisherman filled up the pipe with rocks and that was the
end of the Bull of St Clement.

The location for this episode was on the beach in St Clement.

In this episode the children made 3D fish mobile windchimes. They designed the patterns and features of their fish after observing different images. The film location for Saving the Planet was a Jersey lane and the focus for the episode centres on our Jersey hedgerows.

The hedgerows are really important in combatting the effects of climate change. All the trees, mosses and shade loving plants that grow there along with the woodland areas across the Island help to reduce pollution.

Our folktale for this episode centres around ‘Le Cat au Sauteux’, the story of a kitten found in the Jersey hedgerows. We also reflect on how we might play a part in protecting this local habitat by speaking with a local expert to help us contribute in our own way towards combatting climate change. Our art focus in this episode encourages children into the outdoor environment to look at the beauty and diversity in nature.

In this episode the children made a cyanotype or a sun print by placing objects on a special paper and leaving them in the sunshine. The objects create a beautiful print when the paper is rinsed in water. The focus of this episode is exploring the night sky through a myth about the constellations.

Children learn about our joint responsibility to look after our home which is the planet Earth. The film location for Future Worlds is the Jersey Observatory and the children hear more about the stars from the resident expert.

This episode enables the children to have a voice in expressing their wishes for the future and the activities were timed to coincide with the celebration of Children's Day 2021.

The art activity in Future Worlds involves looking closely at pictures from space, particularly a nebula.

Children then have the opportunity to learn about the colour wheel and explore mixing water colour paints to create their own version. They then add rock salt which creates its own awe and wonder effect, and then they add some flicks of white paint to form their own star constellations.